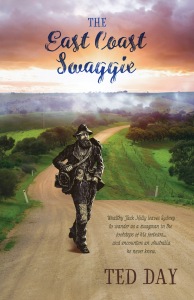 When Jack Kelly leaves behind his prestige Sydney home and idyllic harbourside views to retrace the path his grandfather followed to Mildura as a swaggie during the Great Depression, he says goodbye to his comfortable lifestyle, respected status in the business world,  and hardest of all his loving wife Kate. If he can complete the journey in the allotted time and adhere to the strict rules set down by his sponsor, Donny, Jack stands to raise half a million dollars for a very worthy cause.

Jack initially resists the pressure of Donny’s crazy challenge to walk in his grandfather’s footsteps. But with Kate’s blessing and the knowledge that the funds raised will provide genuine help through the work of the mission sponsored, he rolls his swag and heads South on a ten month odyssey.

With the aid of his grandfather’s diary, Jack plots a replica route to revisit the towns where his grandfather sought work to send money back home to his struggling family. Jack must recreate the experience by hitching rides, carrying his swag, camping out and even wearing a swaggie ‘uniform’ so that he faithfully travels in his grandfather’s footsteps. Author Ted Day has meticulously researched the settings and route to provide authenticity to this traveller’s tale and brings the heartbreaking reality of the Depression era into sharp focus.

East Coast Swaggie is much more than a cracking yarn about the perils and pleasures of a rich man reimagining the hardships of the many thousands of Australian men who took to the road during the Great Depression. It is a Quest story, with Jack as the gallant knight who travels far from home to seek an elusive goal, accompanied only by a faithful companion- in Jack’s case a stray dog, Bluey. Along the journey he more often than not leaves a situation or town better than he finds it: he repairs and renews, rights wrongs, protects the downtrodden, takes the side of the underdog in a fight and delivers rough justice to toughs and wannabe crims. Jack faces many personal dangers along the way but through his wit, strength, skills and occasional backup from supporters he seems set to succeed in every challenge- or will he?

While Jack relies on both his brains and his fists to settle more than a few problems concerning corruption or violence, his journey is enriched by encounters with open and honest folk who restore his belief in the innate goodness of ordinary people. He has many opportunities along the road to use his raw talent without relying on his elite business identity and discovers much about himself, and his grandfather. His is an external and internal journey of discovery about his place in the world and his fellow travellers in life.

From a comfortable armchair, the reader can join Jack as he travels highways and byways, sleeping rough and doing it tough to connect with the past and face the challenges of a modern day swaggie. Carefully researched and brim full of engaging characters, East Coast Swaggie is a traveller’s tale well told and sure to entertain readers ready for a journey with a difference.